Until about 120 years ago, batsi was just a fishing harbour with a few houses. The fishermen tended to live inland in the surrounding hillside farming villages. The permanent population of batsi is approximately 300, rising to several thousand during the summer season. It is the most touristic part of the island with restaurants, cafes and bars. Tourists prefer it because most activities and beaches are here.

Chora is the present day capital and has become quite a cultural centre, offering several museums and exhibitions, including the archaeological and modern art museums. There are shops, cafes, and snack bars, museums, quaint streets and beautiful churches. Chora has something to offer to everyone. Flanked by two beaches, paraporti and nimborio, the peninsula of hora leads to the ruins of a venetian castle and an ancient bridge.

Gavrion is the main port of the island of andros. It is a quiet village until the ferries arrive, when it bustles into life with many arrivals and departures, and then returns to its relaxed atmosphere as soon as the ferry leaves. It is here that the ferries arriving from rafina dock before going on to the neighbournig islands of tinos, mykonos syros. There are several good tavernas here, and it is pleasant to sit in one of the cafes and watch the busy harbour. There are a handful of souvenir shops, and you can purchase the delicious thyme honey that is produced in this area. There are a couple of lively bars in gavrion, and the taverna and disco marabout is about 1km away, for those who want a livelier evening. Just outside gavrion is the beach of aghios petros and the tower of the same name. Further on are the golden sands and kypri beaches. All of them are sandy and there are tavernas nearby. Above the villa of kypri is the zoodochou pighi («life giving spring») monastery. In the past it was a sanctuary for 1,000 monks; it was converted to a nunnery early in the 1900’s and there are now 2 nuns in residence. Open to visitors in the morning and afternoons.

The sleepy fishing village of korthi with its wonderful beach is a popular spot for many visitors. Quieter than batsi, but with good tavernas, cafes and few holiday accommodations. The centre of the village is pedestrianised. Korthi bay is particularly suitable for wind surfing. There are two folklore museums and a museum of woven craft.

Well known for it’s springs, this village is verdant and attractive, with well kept gardens and fruit orchards. In mythology, the site of a temple of dionysus.

A few kilometres from batsi on the main road to andros town is the village of paleopolis, the ancient capital. There is a new museum displaying many of the findings from paleopolis, a traditional cafe and the beach can be reached by 1,039 steps!

They are found on the coastal road between gavrion and batsi. Aghios petros is sandy and organized beach, there are several tavernas on the road behind. Psili
ammos is beautifully sandy, with sunbeds and umbrellas and a snack bar on the beach. Kypri beach is also sandy and is an excellent organized windsurfing beach and scuba diving school. 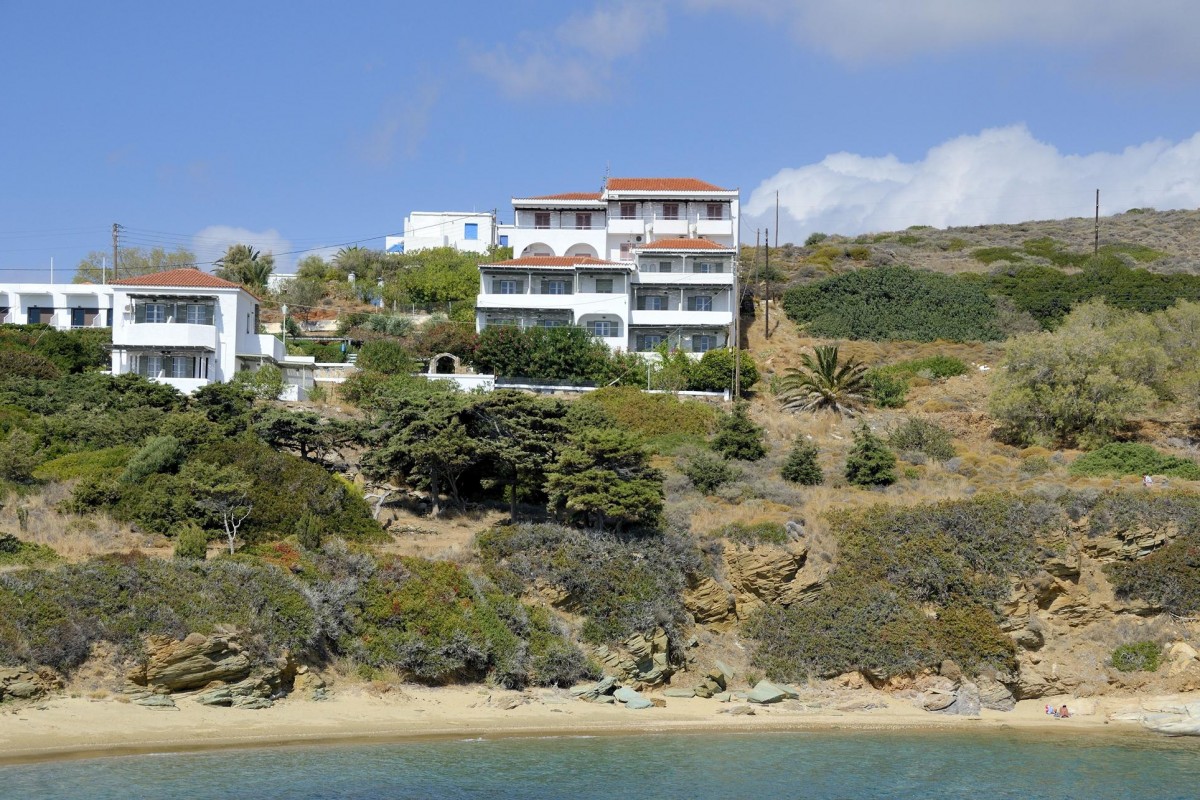